April 6th, 2018
Dependable is a dependency injection framework for Node.js

Recently, Michael Schoonmaker, Joshua Starkey, and myself got together to brainstorm some improvements we wanted to make to an open source library called Dependable that we had used on a client project.

Dependable is billed as “A minimalist dependency injection framework for node.js”, but I feel like it only took on the “minimalist” moniker after we shipped version 2.0 just a few weeks ago. As we sat down to discuss what we wanted to do there were a number of questions that shook out that I feel need to be asked by any team working on an open source project:

As we worked towards the backlog of features, we built up a list of nice-to-haves and must-haves, choosing to defer the former and focus our efforts on the latter. Github Projects actually worked pretty well for a lightweight project management tool. 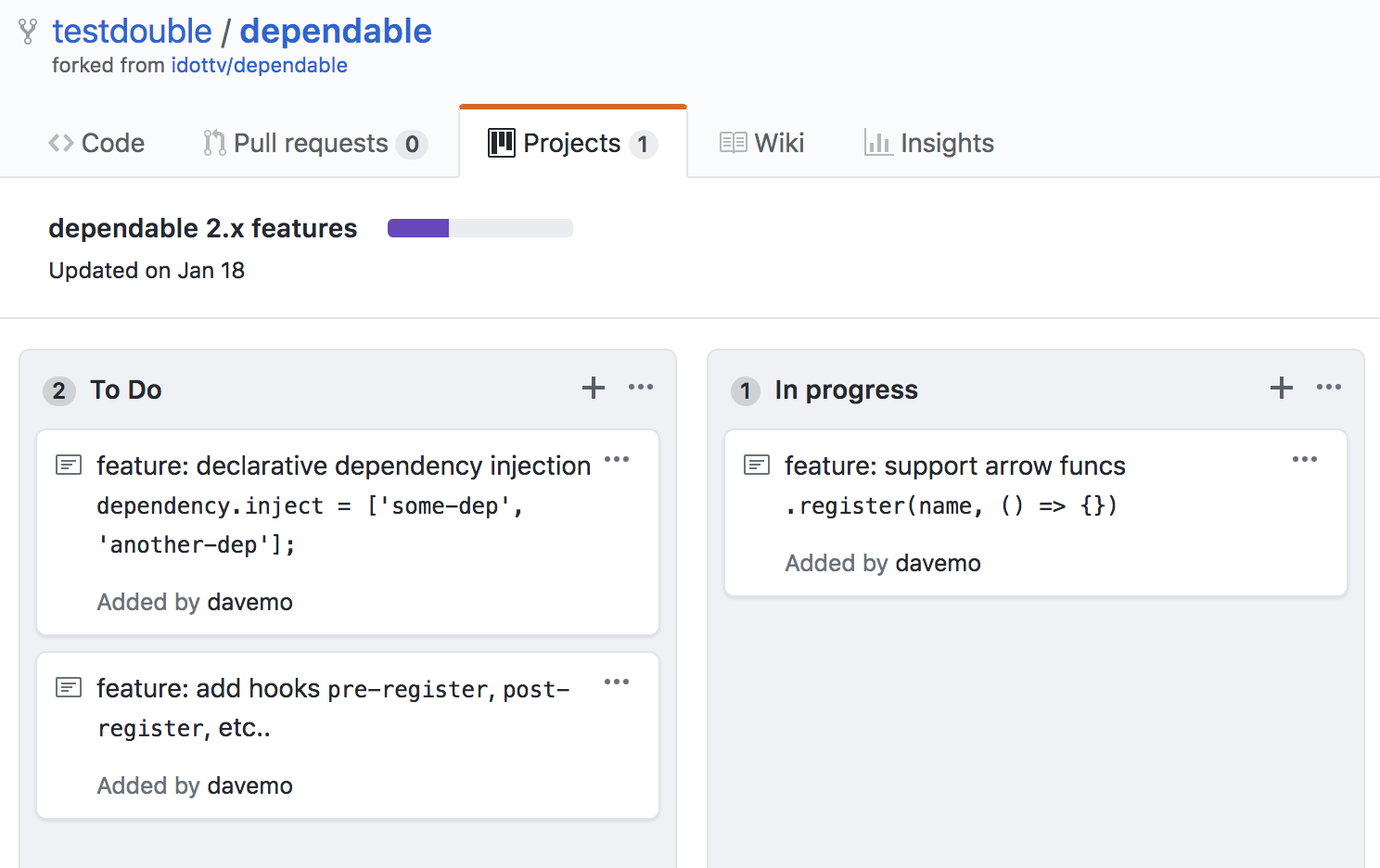 One of our stated goals was to reduce the surface area of dependable in order to eliminate complexity in the codebase. The 1.0 release of dependable included a public API with 6 methods on the dependency inversion container and our rewrite whittled this down to 4. Choosing to have this discussion early allowed us to focus on what the most valuable parts of the API were, using our experience of real-world use within consulting projects to help guide us.

With the API sufficiently whittled down, we also set ourselves to renaming the methods in the public API in order to better reveal the intent for each method and avoid violating SRP (which some of the 1.0 API methods had done via overloading). container.register(hash) became container.constant(name, object), and container.register was renamed simply to container.factory. We deliberated for a while over naming but felt that .factory and .constant were terms that were familiar enough in the context of dependency injection and more descriptive than their 1.0 counterparts.

Dependable 1.0 was written in CoffeeScript which we felt would limit options for potential future contributors. We chose to rewrite the library in ES6 and use standard to manage formatting the code for us. It becomes much easier for future contributors to submit patches when the tooling in an open source project handles formatting of the code.

The test-suite took slightly longer to rewrite due to the removal of container.load(fileOrFolder). We felt that this method complected the 1.0 codebase and was syntactic sugar for what could be accomplished by a user via loading one or many files externally using require or import and then invoking container.factory(name, func) within the context of a call to .map. In addition to translating the .coffee test sources to .js, we also reorganized the test examples themselves to better communicate the intended use of dependable.

A consistent use of objects from a real world scenario involving a Logger, Router, and Formatter in the context of an App was used throughout the test-suite. I’ve found that I’m much more likely to contribute to open source projects that have a well architected test suite with meaningful examples.

In addition, we added first-class support for isolation testing via container.getSandboxed which should be used during testing to ensure that a module under test has been completely isolated.

At Test Double we are proud of our commitment to open source and we take pride in trying to be thoughtful in the way we approach open source stewardship. If you share these values and are interested in joining us you should reach out, we’re hiring!

If you aren’t familiar with the concept or benefits of Dependency Injection these are some great followup resources to get you thinking: